Why Study the Geopolitics of Religions?

Religions are reemerging in the social, political, and economic spheres, in the context of the current crisis of the nation-state, illustrating the limits of secular institutions and ideologies. The political use of religion in domestic and international politics has become a significant factor as regards power rivalries, considerably affecting contemporary geopolitics in different parts of the world. The manipulation of religious factors to promote various political projects represents an important challenge for the peaceful coexistence of communities within states and considerably affects the evolution of current conflicts between states as well. To understand the complex nature of these conflicts and their potential destabilizing dynamics, it becomes necessary to opt for an interdisciplinary and holistic approach in order to avoid simplistic interpretations. Geopolitical Analysis represents a useful tool in this context, since it takes into account the geographical, political, historical, sociological, cultural, demographic, and economic parameters to decipher the complexity of power rivalries in which religious factors are involved.

The aim of this course is to examine how the increasing role of religion influences politics in the context of the erosion of state sovereignty and the crisis facing the major secular ideologies, while taking into account how this process affects different geopolitical configurations on national, regional and global levels. The course seeks to discuss the use of different religious ideologies by both state and non-state actors seeking to achieve geopolitical objectives. In this context, the political influence of the world’s main religions is examined in an interdisciplinary perspective and various case illustrations are discussed on the geopolitical role of Islam, Christianity, Hinduism, Judaism and Buddhism. Having completed this study program, participants are expected to demonstrate the ability to apply the geopolitical approach to examine different case study situations in which religious factors play a role in power rivalries among different state and non-state actors.

Individuals working for international organizations and/or government agencies, those working in various economic fields, university students, and other interested individuals who would like to learn about geopolitics of religions.

Topics of the 12 Lessons

1. What Geopolitics of Religion Is

2. From a Religion of Progress to the Progress of Religion

3. Religion and Politics in the 1970s: The Watershed

7. Buddhism: A Religion of Power

8. Judaism between Religion and Ethnos

11. Catholicism and the Geopolitics of the Church

12. Religions and International Relations in the 21st Century

Learn At Your Own Pace

You can finish the course within a period of two to six months, depending on your own availability and self-study discipline.

Flexibility in Starting the Course

Once your application has been approved and GIGS receives your payment,* you can then enroll in this e-learning course at your own convenience.

A Certificate will be awarded by GIGS upon successful completion of the course.

E-learning tutor for the course

Text book for the course 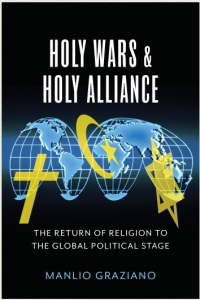 Registration for : Geopolitics of Religions